Before we dive into the cross, let's quickly recap what we have covered so far:

This blog post is going to tackle the two-trait crossing and dihybrid crossing of unlinked genes.

This is similar to doing regular Mendelian crosses, but with two genes this time. The dominant and recessive rules for genes apply here. However, due to the existence of different gamete combinations, it is more complicated than just crossing one gene.

Let's say that we are looking at two characteristics: texture and color. The information we have includes that:

To find the genotypic and phenotypic ratio of the two plants' offspring:

TIP: To prevent silly mistakes, you should always write the genes in the same order, and write down the dominant allele first if there is one.

For the first parent pea plant, it is as follows: 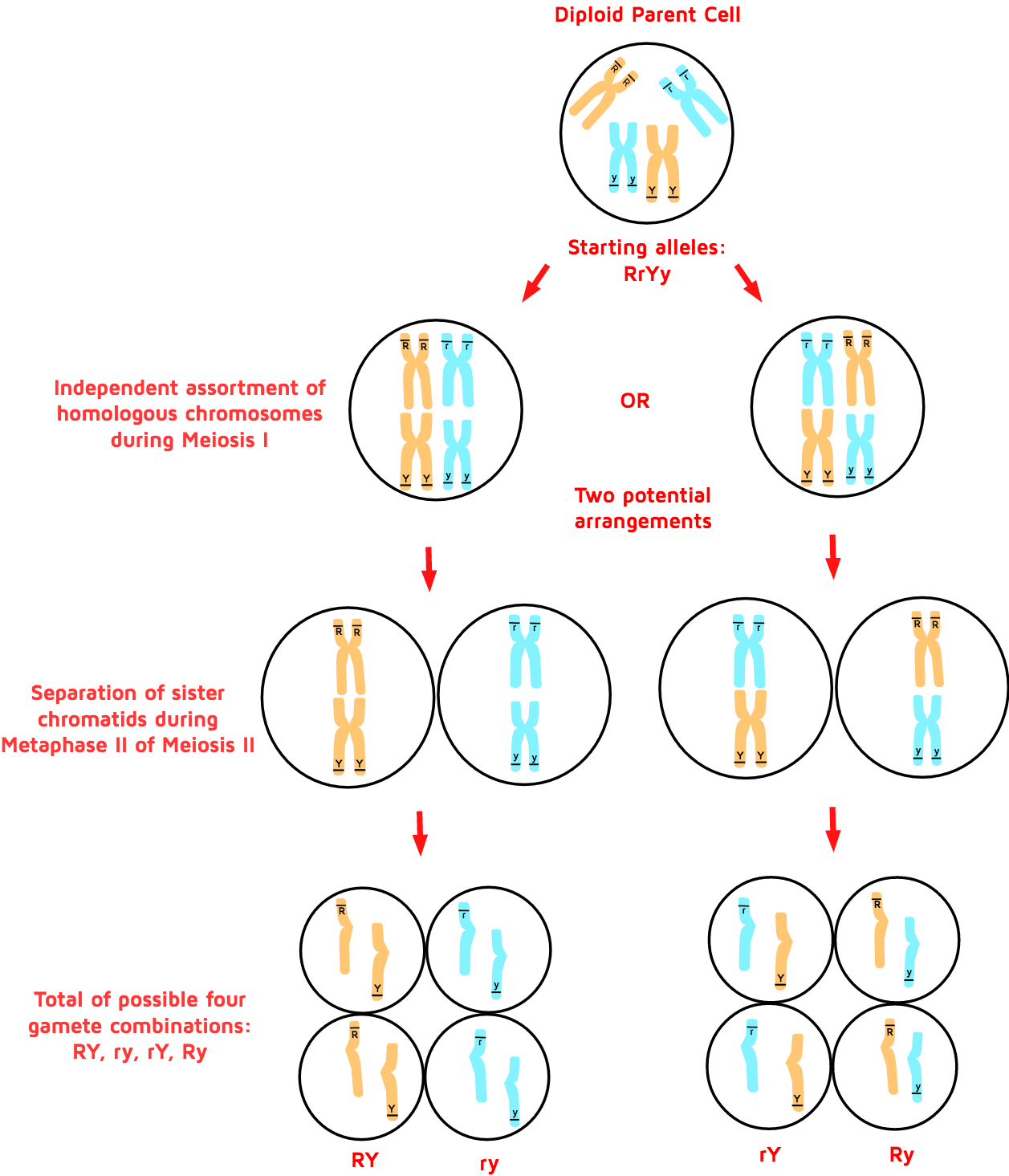 And for the second parent pea plant:

As the second parent has two "rY" combinations, we can note it down as one. This is the same for "ry" combinations.

Keep in mind that the largest possible Punnett Square for a two-trait cross is a 4 x 4 square. This is because the maximum number of possible gamete combinations is four. Thus, if you find that your square is larger than that, then you should check again. Moreover, it is definitely possible that your Punnett Square is less than a 4 x 4. In our example, the square is a 4 x 2.

Fill in the Punnett Square to determine the gamete combinations for the offspring. This is the easy part, but also the part where students are the most likely to make mistakes. Try to follow the rules of writing the genes in the same order and writing dominant alleles first to avoid errors!

Now that you know how to do a cross with two traits, let's move on to a specific case: the dihybrid cross. In this situation, the genotypic and phenotypic ratios will always end up the same way (you will see this later). A dihybrid cross is a cross between two organisms of two genes differing in two traits.

This can be represented as:

To find the genotypic and phenotypic ratios for the offspring: (the process is very similar to the two-trait crossing, and thus, will be simplified this time)

Determine the possible gamete combinations for both parent organisms.

For both parents, the following applies:

Determine the genotypic and phenotypic ratios.

From the dihybrid cross, we can conclude that if a Punnett Square is filled out with a cross between two heterozygotes for both genes, then the phenotypic ratio would be 9:3:3:1. Thus, this information could be useful for quickly determining whether or not two organisms are dihybrids for two traits.

In the next post, we will have a look at how to do two-trait crosses with linked genes.

Monica graduated from Imperial College in 2015 with a Bachelor's Degree in Biochemistry and Management. She has been teaching and tutoring full-time for over three years now and has plenty of experience leading SAT, ACT, and biology classes. Monica not only takes pride in the customization of her classes and makes sure that every student takes away new knowledge and understanding in each and every class, but also that her students find innovative ways to retain the knowledge.